light edge wear to boards and jacket; From the bestselling author of "Hit List" comes the latest crime novel featuring unlicensed private eye Matthew Scudder. The ex-cop will need all his powers of imagination to find the diabolical criminal who brutally murdered a wealthy, cultured couple in their Upper West Side brownstone.
View More...

light edge wear to boards and jacket; ex-library with usual markings; From the bestselling author of "Hit List" comes the latest crime novel featuring unlicensed private eye Matthew Scudder. The ex-cop will need all his powers of imagination to find the diabolical criminal who brutally murdered a wealthy, cultured couple in their Upper West Side brownstone.
View More...

Hero and the Terror

edge wear to boards and jacket; remainder mark on page ends; You are about to meet a deranged sex killer, a human so driven by a force so perverted that you will never again feel completely safe. It's Christmas Eve and Simon Moon is losing his mind. Herrara Fiddleman is chief of detectives for the Venice, California police department. He is a poet and a lover. Endowed with great courage and strength, celebrated for his bold exploits and nobility of purpose, he loves being right. At any cost. That's why they call him Hero.
View More...

spine creasing, edge wear; America's largest cities are in flames. Its majestic landmarks are in ruins. Oceans and boundaries offer no protection. It is the first sophisticated, intelligently planned, and utterly ruthless terrorist campaign waged on U.S. soil. As national leaders, armies, and artificial intelligence strive to win the unconventional war, two men--once friends, now adversaries to the death--race to a decisive confrontation.
View More...

spine creasing, edge wear; In these harrowing times, with our enemies lurking in the shadows and their widespread tactics of unconventional warfare limiting the ability of our traditional armed forces, special measures are needed to fight this war on terror. Heeding this call the President has set up the Joint Services Special Demands Project. Known as "The Team" it is a unique unit existing beyond the bureaucratic restraints of either the U.S. intelligence or military establishments. With an almost unlimited budget, the Team--consisting of a CIA officer, two Special Forces commandos, ...
View More...

Robert B. Parker's Killing the Blues (A Jesse Stone Novel)

By: Brandman, Michael; Parker, Robert B.

slight edge wear, some sticker residue on front of jacket; Massachusetts police chief Jesse Stone's investigation of a violent series of car thefts is complicated by political pressures, the summer tourist season, and the questionable goals of an ambitious PR executive
View More...

311 pages; spine creasing, light edge wear; After witnessing a killing connected to an underworld masterind, Elizabeth Truett is contacted by a young man claiming to be her son--presumed dead in Vietnam. And police Captain Bill Jarek must determine if he's real--or a hitman hired to get rid of Elizabeth.
View More...

320 pages; ex-library with usual internal markings, some spine creasing; When citified attorney Jordan Marshall is ticketed for speeding and hauled before the bench of Judge Waverly of Green Hills, Texas, he is sentenced to serve as court-appointed defender for Wayne Orkney, a local boy accused of attempted murder of his best friend. When the charges escalate to capital murder, he must risk the wildest stunt of his courtroom career to get to the truth.
View More...

Murder in the Title

191 pages; spine creasing, edge wear; Playing the corpse in a murder mystery at the Regent Theatre is not exactly a triumph for Charles Paris. In fact his career could not sink any lower. However, suddenly the mystery spills over into real life and a bizarre sequence of events culminates in the artistic director's apparent suicide.
View More...

Dead Side Of The Mike

light edge wear to boards and jacket; Large Print edition; Acclaimed mystery writer Simon Brett takes readers behind the scenes of a true-crime television show, where actor Charles Paris has found work at last. As Charles reconstructs a missing man's actions for the TV cameras, he discovers that true-crime TV can be deadly.
View More...

1958. No DJ. 278 pages; corner bumping, some edge wear; a bit of yellowing to page ends; Julia Probyn, journalist and amateur sleuth, must acquaint herself with the world of counterespionage. Hetta, a young Hungarian Countess, just released from behind the Iron Curtain, is drawn into a communist plot. Together the two young women will need all of their strength to unravel the schemes and machinations closing in from all sides.
View More...

Date With A Dead Doctor 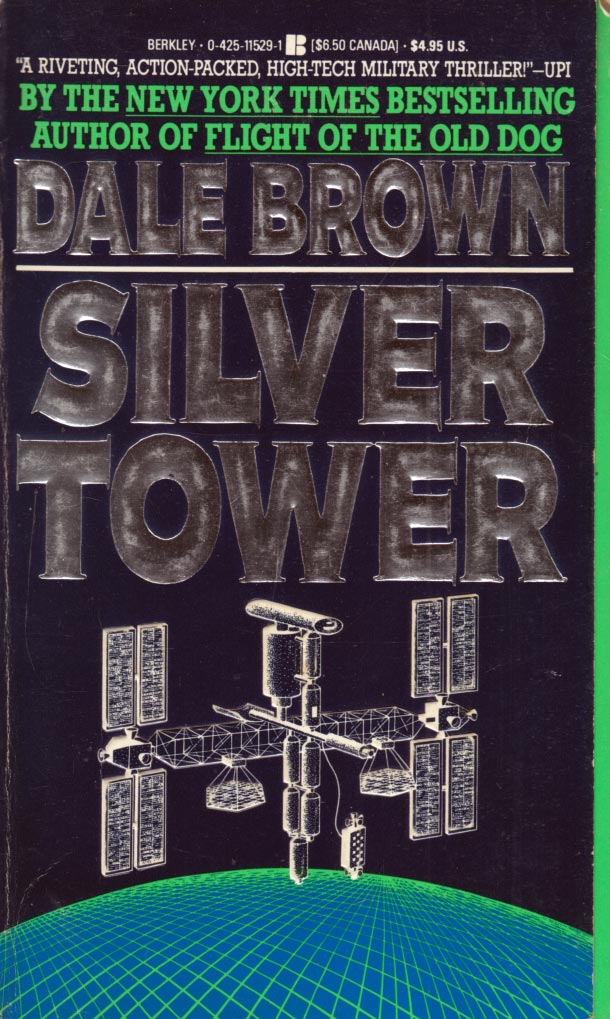 384 pages; spine creasing, edge wear; It is 1992 and Silver Tower is America's first permanent space station, used in defense against intercontinental ballistic missiles. As the Middle East war between Iran and Iraq escalates, the Russians and American's are drawn into the first limited nuclear war in space.
View More...

454 pages; light edge wear; Harvard professor Robert Langdon receives an urgent late-night phone call while on business in Paris: the elderly curator of the Louvre, Jacques Saunlere, has been brutally murdered inside the museum. Alongside the body, police have found a series of baffling codes. As Langdon and a gifted French cryptologist, Sophie Neveu, begin to sort through the bizarre riddles, they are stunned to find a trail that leads to the works of Leonardo Da Vinci - and suggests the answer to a mystery that stretches deep into the vault of history. Langdon suspects the late curator was i...
View More...

spine creasing, edge wear; When world-renowned Harvard symbologist Robert Langdon is summoned to a Swiss research facility to analyze a mysterious symbol -- seared into the chest of a murdered physicist -- he discovers evidence of the unimaginable: the resurgence of an ancient secret brotherhood known as the Illuminati... the most powerful underground organization ever to walk the earth. The Illuminati has surfaced from the shadows to carry out the final phase of its legendary vendetta against its most hated enemy... the Catholic Church.
View More...